We at ProKnow wanted to give a quick update about “what’s next” in terms of the 2016 AAMD/RSS Plan Study.

Participation this year was excellent, with 420 plans submitted by a worldwide community. This is a record high for this type of event (see Figure 1). Full breakdowns of number of plans submitted per TPS, modality, and international region will be presented in June, and participation by clinical role is summarized in Table 1 below.

High participation means lots of data, and we now have over 7,000 data fields to use for statistical analyses. In particular, we will focus on the variation in plan scores and on population comparisons (such as: TPS vs. TPS, modality vs. modality, clinical role differences, etc.). We will also study estimated delivery efficiency, an important factor for hypo-fractionated cases such as this SBRT prostate.

In addition, we will conduct a basic audit of the high scoring plans and flag anything irregular, such as ~identical plans coming from planners from the same institution, curious does results (e.g. zero max dose to an OAR that would obviously receive non-zero scatter), or abnormally complex beam arrangements or high treatment times.

A short list of high scorers will be distributed to seek volunteer “peer educators” who may be contacted by the AAMD or RSS to help clarify their successful methods. But don’t worry, if you are not contacted it does not mean you are not a high performer (!). The AAMD will be looking for a mix of backgrounds and perspectives, while the RSS in particular will be seeking those who will also be at their meeting, so that they can actually present their methods in person. Also, only clinical users will be contacted first as potential educators, i.e. vendor employees who submitted plans will be recognized as high performers but not solicited as educators.

The results will be presented twice in June. The first presentation will be at the AAMD meeting (Atlanta, GA) on Monday, June 13, by Ben Nelms. On Saturday, June 18, Mary Ellen Masterson-McGary will present at the RSS meeting (Orlando, FL). We do plan to publish the results in an applicable peer-reviewed journal.

Analyzing Your Performance vs. the Population

After the aforementioned meetings, i.e. in late June, we will activate the ProKnow “Statistical Analysis” tab so that each user can sign in and interactively study their performance vs. the population, not only for total plan score but also for each component metric.

Figure 1. Participation levels in terms of number of plans submitted. Shown are the 2011-2015 AAMD Plan Challenges and the 2016 AAMD/RSS Plan Study. 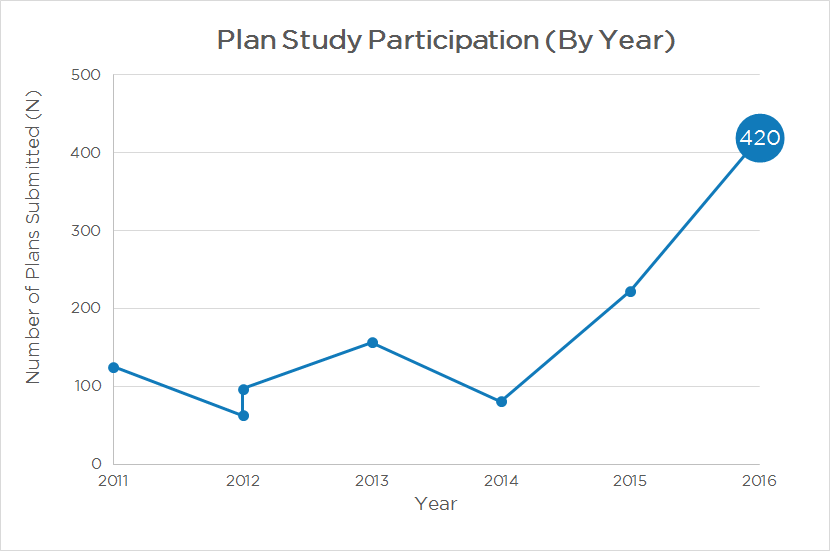